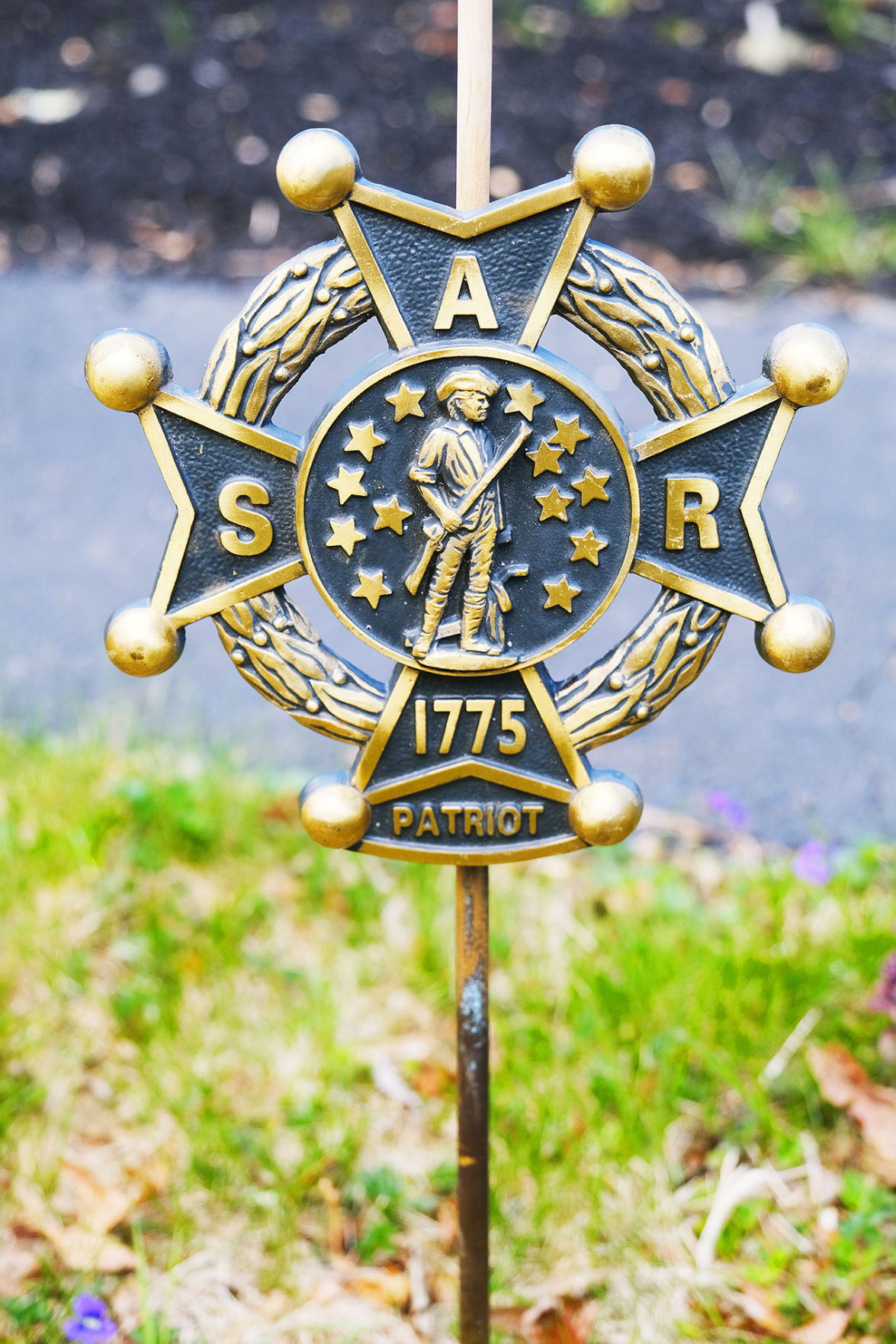 Some of the markers are made of bronze and are quite old, Mr. Johansen said. He believes this marker was made for a Revolutionary War veteran’s grave. 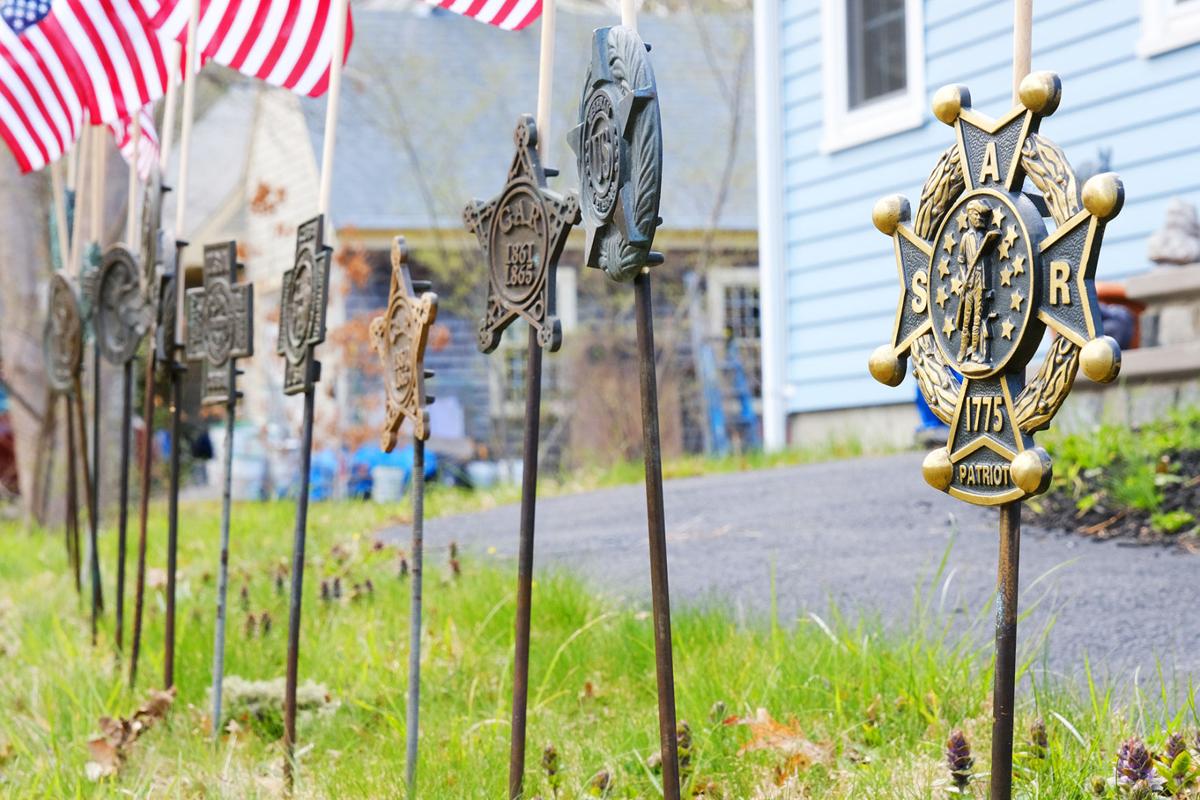 Military grave markers set up outside Carl Johansen’s Sandwich home—anyone wishing to contact Mr. Johansen can do so through the Enterprise by emailing webeditor@capenews.net.

Standing outside of his South Sandwich home, Carl Johansen examines the military grave markers that he has recovered. He believes the markers were stolen from veterans’ graves and he is looking to return them to their rightful owners or put them on display at the new town office building.

Sunlight brightened the gold lettering on Carl Johansen’s US Navy baseball cap as he pored over research papers piled on his lap.

Mr. Johansen, who is the town’s unofficial military historian, believes the 13 medallions, temporarily on display in his front yard, were removed from the graves of veterans.

“Most of them are bronze and antique, so I believe they were stolen from the graves of veterans—maybe Sandwich veterans—by someone who intended to sell them,” Mr. Johansen said.

He acquired them recently from a young father who had been tasked with transporting a car to a junkyard for scrap. Before leaving the car, the man took a look in the trunk, saw the medallions, and knew they should not be thrown away.

“He made the right decision,” Mr. Johansen said. “He recognized that they were significant.”

The medallions, which adorn small flag holders, are supplied to veterans families, per request, by the US Department of Veterans Affairs to signify the deceased person’s status as a veteran, according to the federal Veterans Affairs’ website.

“This device is furnished in lieu of a traditional Government headstone or grave marker for those veterans who served on or after Apr. 6, 1917 and whose grave in a private cemetery is marked with a privately purchased headstone or marker,” the VA website says.

The oldest of the medallions now in the care of Mr. Johansen dates back to the American Revolution.

It bears the letters SAR, is dated 1775, and depicts a patriot bearing a musket and surrounded by 13 stars.

The letters stand for Sons of the American Revolution, according to Mr. Johansen’s research, but it also, he believes, stands for soldiers and sailors.

There are medallions from the Spanish American War, World War I and II, the Vietnam War, Korea, and general service medallions for the GAR (Grand Army of the Republic) the American Legion, the Ladies Auxiliary of the Veterans of Foreign Wars, and the VFW.

“The only war that’s missing is Afghanistan,” said Mr. Johansen, a Vietnam veteran and member of the Sandwich American Legion Post 188.

Mr. Johansen said he used a brush and water to clean the grave markers, but was careful not to damage the metal by using any kind of solvent.

After researching the history of each marker, Mr. Johansen put in a call to the commander of Post 188 to enlist the American Legion’s support for creating some kind of permanent display case for the medallions.

Then he visited Town Manager George H. (Bud) Dunham to ask if the medallions could be displayed at the new town office building, now under construction, at 100 Route 6A.

“I am thinking we could have three shadow boxes made with holes in the top to display flags on special occasions,” Mr. Johansen said, showing a sketch he had made of the display boxes—each of which would hold five medallions.

But the medallions may not make it that far.

“If someone is reading this and they know of a flag medallion that has been taken from the grave of a family member, they should come forward and let me know,” Mr. Johansen said.

If he does not hear from veterans’ families, Mr. Johansen said he is dedicated to his mission of keeping the markers safe and giving them the respect they deserve.

“Even if we do not know their names, or whether they died in battle, we do know they served their country,” Mr. Johansen said. “They helped us remain a free nation.”