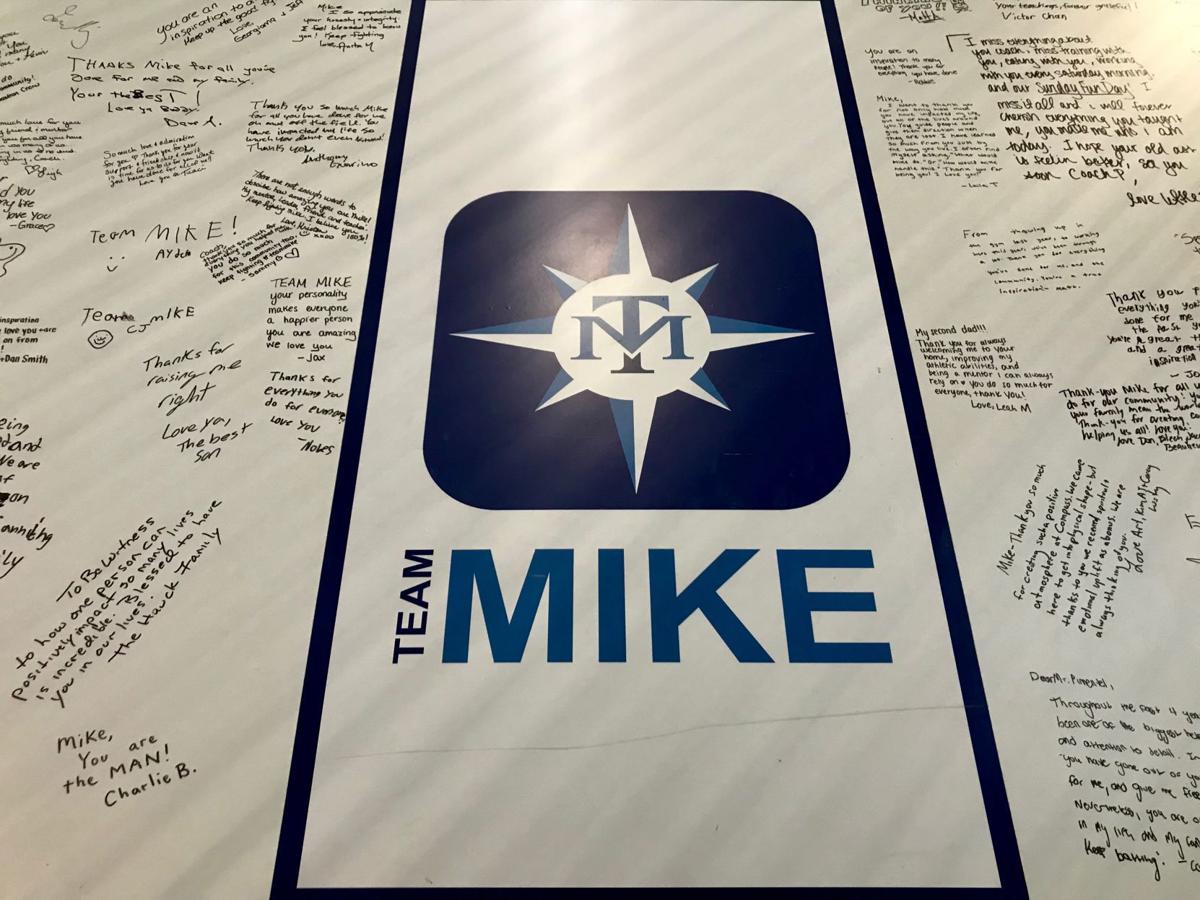 Signatures and tributes to Mike Pimentel flank the Team Mike Compass at Compass Athletics in Sandwich. 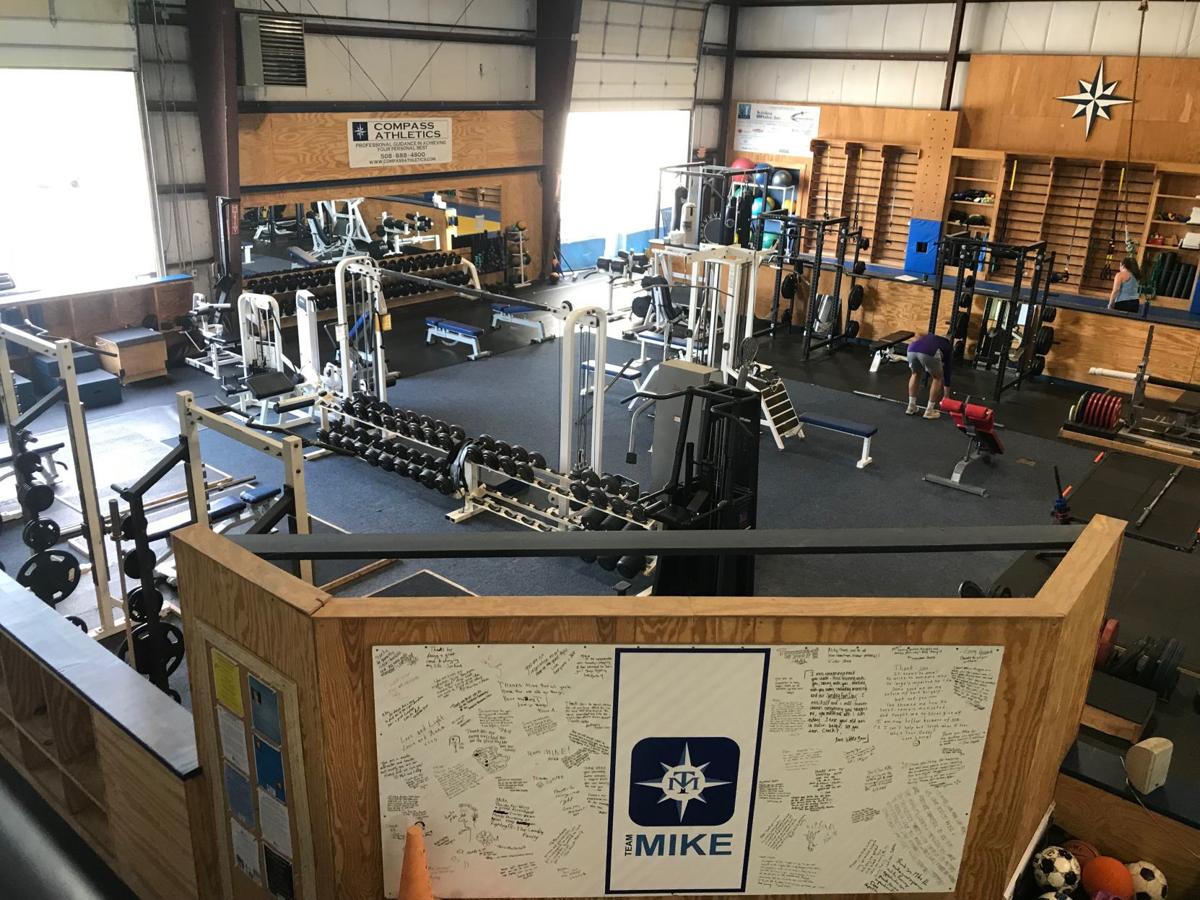 A year after founder Mike Pimentel died, Compass Athletics in Sandwich still honors him. He helped better everyone he came in contact with.

Signatures and tributes to Mike Pimentel flank the Team Mike Compass at Compass Athletics in Sandwich.

A year after founder Mike Pimentel died, Compass Athletics in Sandwich still honors him. He helped better everyone he came in contact with.

Amid the array of dumbbells and squat racks, beyond the stretching area and in front of the expansive turf surface in the 12,000-square-foot facility of Compass Athletics hangs a white banner with the Team Mike emblem nestled in the middle. Flanking both sides of the iconic compass logo are a series of personal messages to the facility’s founder, Mike Pimentel, written in black magic marker.

Some called him a real-life hero. Others shared a personal experience of how he helped improve someone’s life. A few peppered him with compliments, calling Pimentel a mentor, a master motivator and a healer. But every message thanked him for his positive impact on their lives.

The banner serves as a physical reminder of just how many lives he touched, even if Pimentel was too humble to share those experiences himself.

“He would never talk about [any of] that,” his wife, Rhonda Pimentel, said before adding with a chuckle, “but I had no problem bragging about it. He was a very talented man.”

After a lengthy battle with renal cell carcinoma, a form of kidney cancer, Pimentel died last July, leaving behind his wife and their three children—Alex, Katie and Grace. Although not physically here, Pimentel’s impression on local athletes of all ages is still noticeable today.

“For me to hear from people I didn’t even know, to hear them say the exact words that came from his mouth, I know he made an impact,” Katie said. “Everyone took what he said to heart.”

Pimentel came to town in 2005 after working 26 years at Tufts University in a number of roles, including being the head strength and conditioning coach. He began his training business in the garage of his family’s home before shifting to a space off Route 130, where Compass Athletics currently is. With an emphasis on training the whole body, Pimentel stressed unilateral work, resistance training and slowing things down.

That’s what stood out most to Leigh Travers, the current owner of Compass Athletics and longtime understudy to Pimentel.

“Moving big weight never interested him,” Travers said. “Some of my favorite experiences with him were watching him work with big power lifters, who are probably used to dead-lifting 450 pounds.”

With just a lightweight plastic bar in hand, he’d have these power lifters pouring sweat, Travers said, holding their form and moving slow. He’d make sure to have them pinch this muscle here and squeeze that muscle there to really engage the target zones.

“I think it was a humbling but valuable experience for everyone in the room that day,” Travers said.

Perhaps more than anything, Pimentel was a teacher wielding the powerful tool of patience. Those who regularly spoke with him recalled how he never told anyone what the right path was, rather asking questions in hopes they arrived at the conclusion on their own.

“He was a lot of things, but maybe best of all he was always a teacher,” Travers said. “That was his gift.”

Sandwich High varsity baseball coach Brian Tomasini echoed a similar sentiment of the importance of building relationships, particularly with young student-athletes. Many of the Blue Knight ballplayers trained at Compass during their off-seasons. As a tribute to Pimentel’s impact, the team stitched the Compass emblem on their ball caps this season.

“We talked about every time we put that hat on to make sure we remember everything he stood for and what he taught so many people,” Tomasini said.

And that was humility, hard work and sportsmanship, whether it was on or off the field. One of Tomasini’s players, Tyler Wudyka, who’ll play at the NCAA Division II level next spring at St. Anselm College, worked with Pimentel for 10 years. He took to his teachings so much so that he later joined Compass as an employee.

The Team Mike bracelet he owns never leaves his wrist, serving as an internal compass that continues to guide him on a day-to-day basis.

“Every moment during the day I see it, I know to give what I am doing at the time my all, just like Coach wanted,” Wudyka said.

Leah Mahoney, a recent graduate of Sandwich High who’ll play lacrosse at NCAA Division II level for Stonehill College, had known Pimentel since she was in the 5th grade and keeps a picture of him taped to the dashboard of her car to always keep him close.

“I can still hear his laugh and, on my worst days, his voice appears in my head, asking me questions and helping me find solutions,” Mahoney said.

Pimentel had a saying—well, he had many of them according to those who knew him. But perhaps the one he was most known for was “leave everything better than when you found it.” It’s easy to say something that’s catchy, but it’s a lot more difficult to live it. Pimentel did exactly that, as evidenced by the some 700 people who went to his wake last summer and the roughly 500 people who followed the wake by appearing at his celebration of life at Compass Athletics.

That’s not to mention the countless people he helped to improve their athletic performance, avoid surgery with preventive therapy or aided in rehabilitation work.

“That saying is one of those things that, 50 years from now, we’ll still be looking back on everything Mike Pimentel has touched,” Tomasini said. “Everything he touched, everyone he worked with was better off and it still shows today.”

And he’s still helping others improve. The Coach P Scholarship for Sportsmanship, managed by the Cape Cod Foundation, awarded a total of $6,000 in scholarships to four graduating seniors from the Town of Sandwich; the recipients embodied what Pimentel valued most: humility, hard work and sportsmanship. Former Blue Knights Alec Abramson, Brendan McGillicuddy and Jax Beaulieu joined Nauset grad Emily Miller, a Sandwich resident, as the first recipients of the scholarship out of a pool of 12 applicants.

“I’ve always known that he would have this type of impact in life,” Rhonda Pimental said. “That’s the man who I married. He was an amazing person in or out of the gym.”

Kristen Gorrasi, who’s been at Compass Athletics since the very beginning with Pimentel, said his legacy lives on in the people he’s helped over the years.

“He taught [so many] how to be coachable, humble yet driven, respectful athletes,” she said. “And they pay it forward. Many of his former athletes keep Mike close to their hearts and have taken on leadership roles in their careers.”

Wudyka and Mahoney are just two examples of that, as they both served as team captains on their respective teams this past year.

“He’s still so present, with so many of these kids who worked with him,” Tomasini said. “He left such an impression on so many people that they won’t ever forget.”

Upon taking over operations at Compass Athletics, Travers said it took her some time to officially move into Pimentel’s old office. But now she keeps a close reminder of him on her desk. At the celebration of his life, Pimentel’s family cut up a bunch of his Team Mike T-shirts into one-inch squares, put them in a bowl and passed them around to everyone in attendance. She keeps her square by the keyboard of her computer.

“I keep him close,” she said. “This place is still so much of him.”

A year following his untimely death, Pimentel is the embodiment of the phrase he was synonymous with—still aiding those who are willing to work hard enough to achieve their goals.