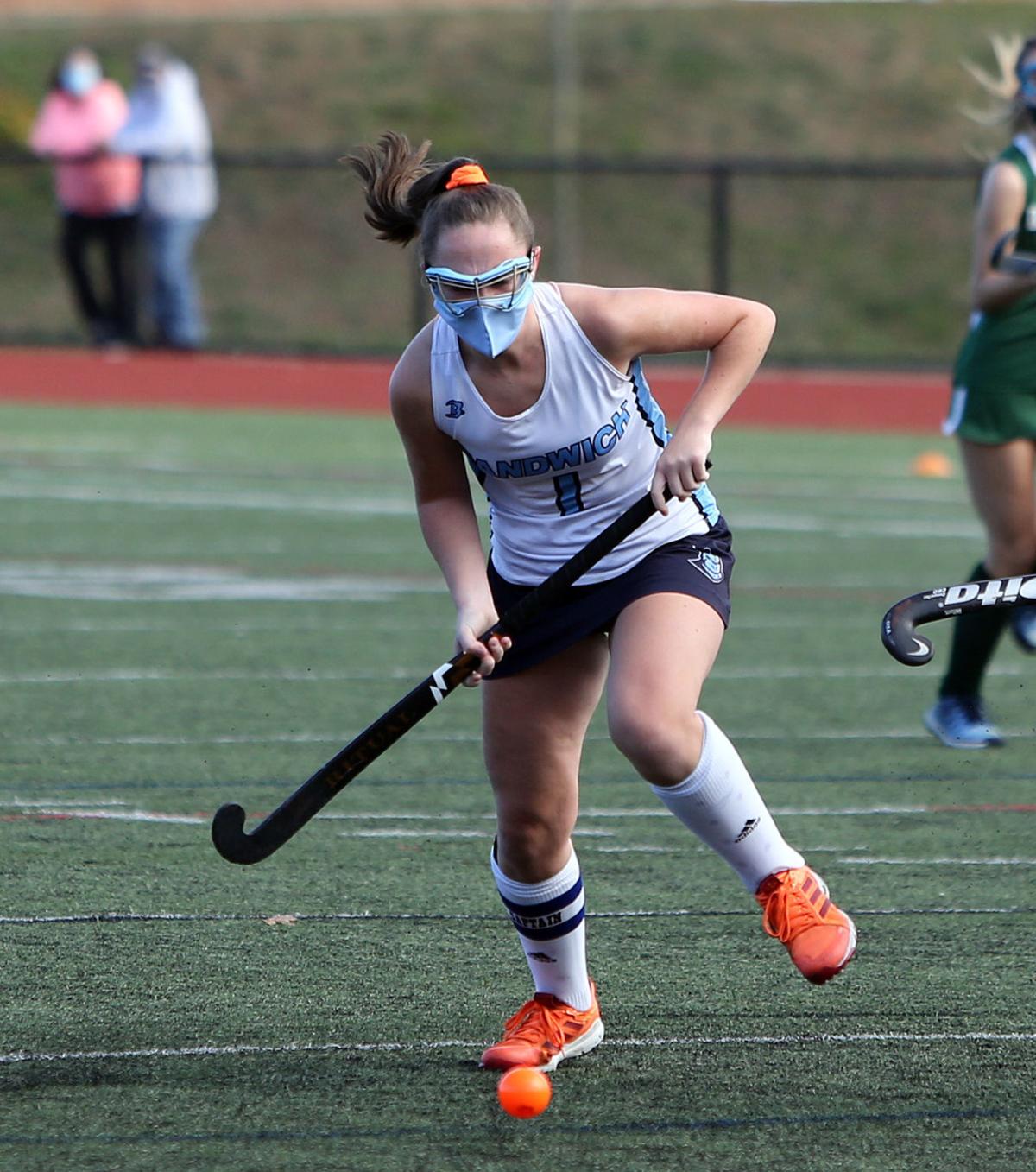 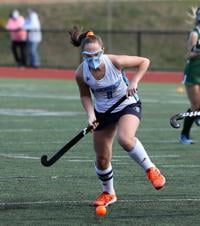 Senior Macey White was one of the Blue Knights who earned All-Cape and Islands League recognition for her outstanding season on the field hockey team. 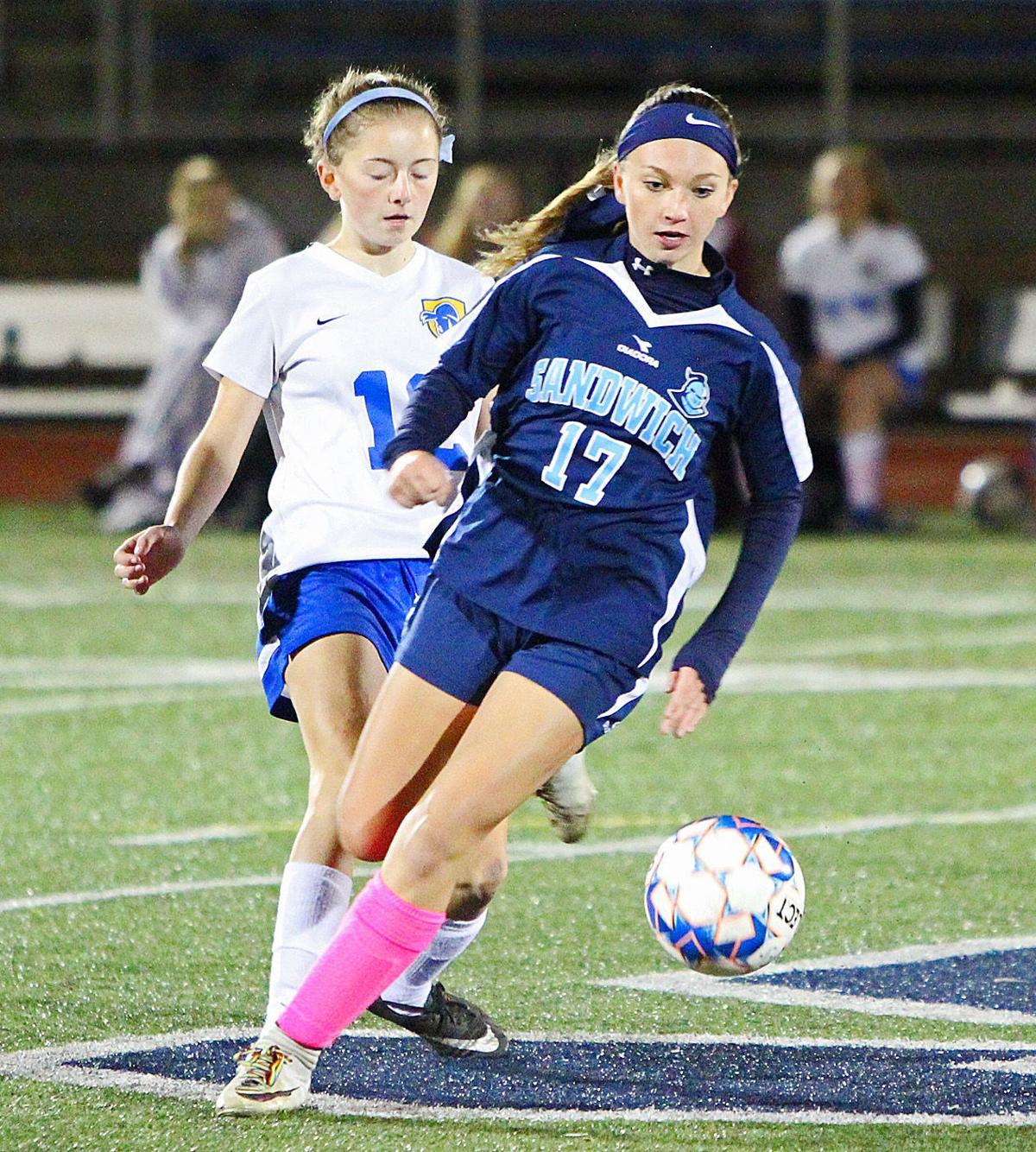 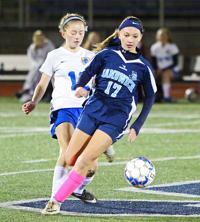 Bridget Gleason earned a spot on the All-Star team for her great year on the pitch for the Knights.

Senior Macey White was one of the Blue Knights who earned All-Cape and Islands League recognition for her outstanding season on the field hockey team.

Bridget Gleason earned a spot on the All-Star team for her great year on the pitch for the Knights.

It was not your usual 2020 fall season, but that doesn’t mean that the Blue Knights playing their sports weren’t giving everything they had. Playing boys’ and girls’ soccer, field hockey and cross-country this past fall, Sandwich High had 13 players earn All-League status in the Cape and Islands League.

The All-League competitors have several things in common, including the willingness to give a strong effort each time out, and skill levels that were earned through hard work and determination over the course of their athletic careers.

Maura McIver: An extremely versatile player, McIver played and excelled as both a midfielder and defender throughout her career at SHS. A leader on and off the field, coach Kelsey Beaton said that she will be sorely missed next season.

Molly Dwyer: A rock-solid defender, Dwyer’s field vision and anticipation as the last line of defense this season made her a standout player for SHS. While not flashy, she always got her job done.

Lily Tobin: A tenacious player, Tobin’s no-nonsense, no-quit attitude is something every coach desires on a team. She gave maximum effort every minute on the field. Beaton said her style of play is “infectious to the rest of the team.”

Macy White: A five-year starter and four-year all-star at SHS, White’s stickwork and speed with the ball puts opposing defenses on their heels. She works hard during the offseason and that hard work has paid off as she is playing Division I field hockey at UNH next season.

Paige Hawkins: Sandwich’s leading scorer, Hawkins averaged about 1.5 points per game for the season. Her stick work and dodging created chances on the regular for SHS and she had an impact in every game that the team played.

Jake Sutton: The junior and two-year starter for the Blue Knights had a huge season this past fall. He scored a pair of hat tricks and finished with a team-high eight goals for the season, working as both an attacker and a midfielder. Sutton was also named to the All-Eastern Massachusetts All-Star Team for the season for his strong box-to-box play all year long.

Bridget Gleason: A co-captain and four-year varsity player, the Knights’ “Energizer Bunny” was quick, aggressive, and a talented ballhandler. A vocal leader on and off the field, the team offense flowed through her. Gleason had the most assists on the team (six), which was among the highest in the Cape & Islands League. She has committed to play at Bentley University next year.

Daria Horman: After missing all of last season with a torn ACL, Horman was back at it and did not miss a beat as she played cool, calm and collected on ball all year. With superb vision and passing, the hard worker led by example and made it look easy. She was the top scorer for the Knights, potting six goals, and one of the best in the league. She earned All-Eastern Mass as well.

Sarah Lutsic: The three-year starter in net for the varsity, Sandwich’s goalie was tops in the Cape & Islands with a 0.50 goals-against percentage. A vocal and mature leader on the field, she allowed just five goals in 10 games and had six shutouts.

Megan Lizotte: A four-year varsity player, the co-captain and fullback is a smart, tough defender, and was the best at her job on the team. DeConto said she was “The General” on the backline and “our coach on the field,” making constant suggestions and adjustments to help the team succeed.

Hanlyn O’Neil: The senior outside back was a two-year starter on varsity. Smart, thoughtful and constantly asking questions, according to coach Dave DeConto, the defender constantly was involved in the team attack with long passes or shots on goal. A big part of the team’s defensive backline that made it hard for opposing teams to score.

Max Sullivan: Consistently the fastest runner on the boys’ cross-country team, Sullivan challenged the fastest runners in the Cape and Islands League and held his own. The junior regularly ran quick times and was the team’s pacesetter.

Claire Davies: Running better and better each year, the junior has moved up the ladder to become a dependable scorer and one of the faster runners in the Cape and Islands League. Davies regularly put up fast times for Sandwich and had the Knights in contention each week.

Caitlin Kelly: Another fast junior for Sandwich High, Kelly was very consistent for the Knights this year, regularly putting in finishes in the top 10. The junior has shown consistent improvement through her career and has her fastest times ahead.