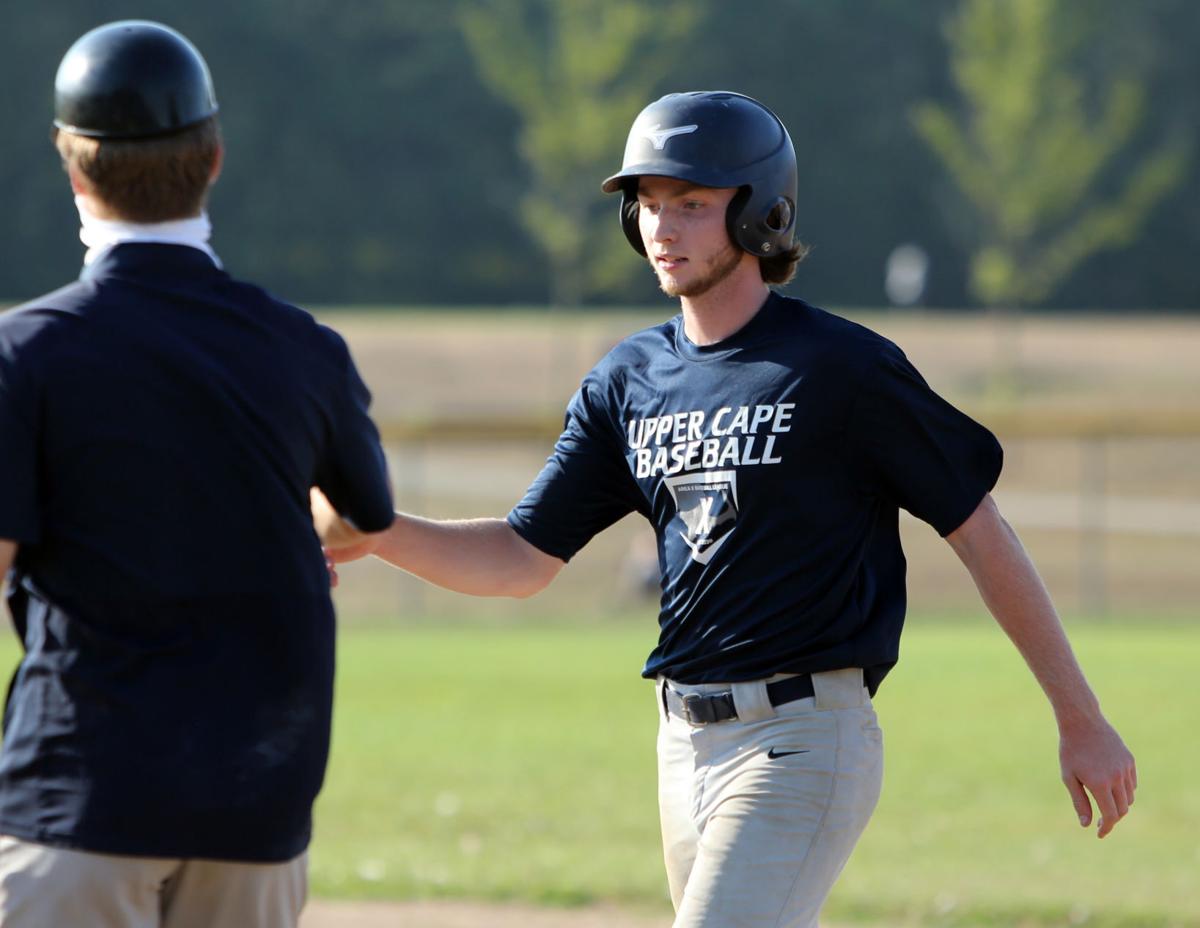 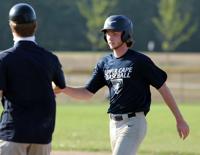 Mike Petite and his Upper Cape teammates had a lot to shake hands about over the last two days as they piled up 22 runs in two games to advance to the Area X championship game. 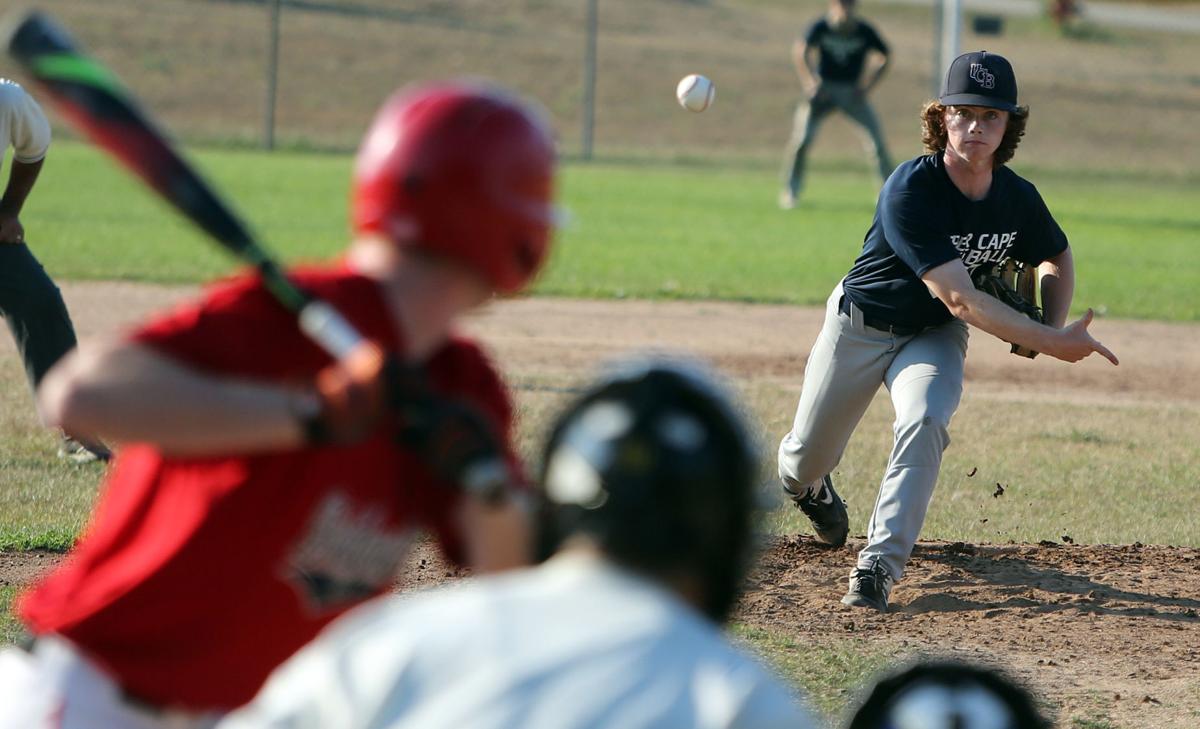 Mike Petite and his Upper Cape teammates had a lot to shake hands about over the last two days as they piled up 22 runs in two games to advance to the Area X championship game.

Coach Brian Tomasini calls him “Big Game” Benny. Over the last three years, when American Legion Post 188 has had a game that needed winning, there was a good chance that “Big Game” Ben Smith was on the hill for the club. So it was natural that in a must-win playoff game against Wareham that it was Smith who took the ball from Tomasini on Wednesday, August 12. It was also no surprise that Smith delivered, helping his Upper Cape team advance to a winner-take-all rematch against Wareham on Friday, August 14.

A champion of the Area X League, a one-year summer league of southeastern Massachusetts Legion squads that lost their regular seasons due to the coronavirus pandemic, will be crowned at Sandwich High School. The first pitch is slated for 5 PM.

The lefthanded starter walloped Wareham the first time through the order and dominated the visitors for six innings before turning it over to Johnny Nunes with the lead well in hand. Smith claimed the victory in an 8-1 win by Upper Cape in his final pitching performance for the program.

Smith said he knew coming to the ballpark that this was his final game pitching for Post 188. He will be back in the lineup, playing the field, for the last time in the title game.

“It’s been a ride...it’s been surreal,” Smith, a Bourne High graduate, said of his time pitching for the Sandwich-based post. “I woke up and I was like, ‘All right, this is it. Do or die. Either way I’m not (pitching) again for this team, so I’d better throw everything that I’ve got.’”

From the get-go it was obvious that Smith was on top of his game. He struck out two Wareham batters in the first inning, worked around a pair of errors in the second and did not allow a hit until the third. He carried a shutout into the sixth, but Wareham strung together a one-out single, its only base on balls and then a double to center to break it up. With a 7-1 lead in tow it was hardly anything to worry about. Smith said he would have liked to have the shutout stat line, but was pleased with how he finished after the double, recording a strikeout and a weak fly out to second to end the inning.

“He’s been (with Post 188) for three years and as far as I can think of, he’s pitched in almost every big game that we’ve been in and he did it again today. This is his last year playing Legion, or Area X ball, and he came to play tonight. He had the guys ready to go, he filled it up and gave us a chance,” Tomasini said of his starter.

The lineup supporting Smith did its job, getting to Wareham early with two runs in the bottom of the first. An RBI single to left by fellow final-year player Will Good made it 1-0. Good later scored on a wild pitch after a triple by Sam Cavossa that put him at third.

Three Upper Cape runs in the second inning opened things up. With a man on and two outs Smith hit a rising liner to right field that exploded out of the fielder’s glove and fell to the field to keep the inning alive and score Max MacDonald. The red-hot Willie Baker followed with a double over the right fielder’s head that scored Smith, then Mike Petite singled through the middle to score Baker and make it 5-0.

“The way that they came and played today, they were ready to go and when you’re playing winning baseball, like our program does, they knew what they had to do today to give us a chance on Friday,” Tomasini said.

Upper Cape got two more in the third inning when Keaton Aliberti launched the first home run of his Legion ball career, driving it deep over the right field wall to make it 7-0. After Wareham scored its only run in the sixth the home team got it right back on another RBI hit from Baker that brought home Aaron Cole.

The youngest member of the Upper Cape American Legion team came through like a seasoned veteran when the team needed it most to help get his team through the Area X semifinals and into the championship against Wareham. Having lost to Wareham in the second round, Upper Cape put itself into a position of needing two wins in the finals to take the title. Wareham needed just one.

Rising sophomore Colton Colleran of Mashpee breezed through the first three innings against Bridgewater and with his team scoring three early runs, everything looked great for Upper Cape. A leadoff single by the visitors in the fourth inning and a lazy liner to right followed by two errors in a row by the Upper Cape infield changed the game’s complexion almost instantaneously.

In a matter of moments Colleran found himself in a high-pressure situation, with the bases loaded, no outs and the potential go-ahead run at the plate. The sidewinding pitcher dug deep and delivered.

“He makes everything look so easy. He’s just so poised out there,” Tomasini said. “They load them up, there were a couple of other innings when they had runners on base, and nothing fazes him. He just shut them down, and we made a couple of nice plays behind him. He just pitched a really good game, like always.”

Colleran got out of that jam, allowing just one run and minimizing the damage. An RBI fielder’s choice, a popup to Willie Baker at first and an easy grounder to Sam Cavossa at third ended the Bridgewater threat and left Upper Cape ahead 3-1.

“I just come out and throw the ball and do what I can do,” Colleran said. “I was just thinking I’ve got to keep the ball down, try to get us a double play, get us out of the inning.”

Mike Petite, who was 4-for-4 to help lead the offense, said the squad got a huge lift from escaping the jam in the top of the fourth.

“It was huge. We came right out and started putting runs up on the board,” Petite said.

Upper Cape responded by going out and scoring five times to blow the game open, taking an 8-1 lead. Petite was in the middle of the outburst, greeting a Bridgewater reliever by smoking an RBI single to right center to make it 6-1. Will Good followed with a two-run double to the gap in right center to make it 8-1. Aaron Cole and Willie Baker (3-for-4) also had run-scoring hits in the big fourth inning.

Petite, who has been a monster among monsters in the stacked Upper Cape lineup, said he is seeing the ball very well and is having a lot of fun.

“It’s looking like a beach ball coming down the middle,” Petite said. “We were just excited to get out here today and come back after losing to Wareham so that we could get them again. That was what we were playing for.”